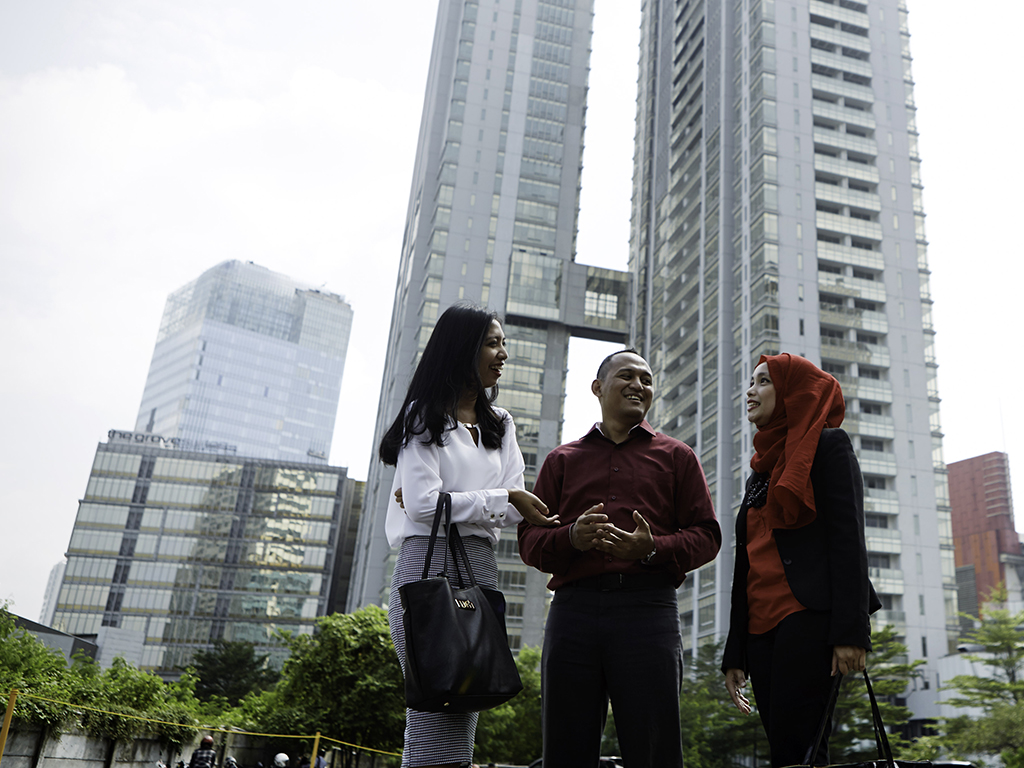 Our Management in Asia

Our senior management team in Asia comprises of passionate and experienced professionals with a strong track record of success in the insurance and financial industries.

At Generali, we believe in attracting and developing exceptional talent and we welcome diversity and individuality. Many of our senior executives in Asia have succeeded through their hard work and from the opportunities we have given them to grow and learn.

Collectively we work towards providing value to our customers in our eight markets by offering a complete suite of innovative, personalised solutions through our unmatched distribution network.

As Regional Officer, Roberto Leonardi oversees Generali Asia’s insurance operations in both Life and Property & Casualty businesses. Rob has 25 years of experience in Life and Health businesses across Asia, Europe and South Africa.

Prior to joining Generali, he was with AXA Asia where he was responsible for Health & Employment Benefits, Protection, Marketing, Digital and Big Data. Before AXA Asia, Rob worked at Munich Reinsurance where he was Regional Head of the Munich Health overseeing the health reinsurance and insurance businesses with specific focus on Greater China, India, Indonesia and Japan.

He also spent 13 years with UnitedHealth International (a listed Fortune 25 company) where he held several executive positions including Executive Vice President & CEO of UnitedHealth Asia, CEO of Portugal and Chief Operating Officer and Chief Financial Officer in its joint ventures. During his tenure, he turned around the Asia business and was actively involved in M&A activities in various markets across Asia.

Rob started his career as a chartered accountant with Coopers & Lybrand in South Africa. Born in Italy, Rob grew up in Denmark and South Africa and currently lives in Hong Kong.

Fabrice Benard is responsible for steering the strategic growth and development of our P&C business in Asia.

With over 15 years of experience, Fabrice brings on board deep technical and strategic experience in P&C retail, actuarial, risk management, financial, bancassurance and M&A. He has worked in Europe and the Gulf in a variety of roles with AXA, Credit Agricole, PricewaterhouseCoopers and Zurich.

Nick brings with him a wealth of experience having spent more than 13 years in the insurance industry. He has worked in both regional and country roles in Hong Kong, Korea, Vietnam, Dubai and UK.

Nick started his career with PricewaterhouseCoopers in London after graduating from Bradford University (UK) with a degree in Business and Management Studies. He is an ACA qualified accountant.

As Regional Head of Distribution, Bruce de Broize is responsible for driving growth in Life and P&C businesses across Asia, by formulating and implementing strategies for all distribution channels.

Bruce has over 29 years of insurance experience in both Life and P&C insurance companies in South Africa, Australia, and Asia Pacific (in particular Korea, China, Taiwan, Japan and Hong Kong). Prior to joining Generali, Bruce was the Regional Chief Distribution Officer for AXA Asia, and he also held various senior distribution leadership roles with AIG and Allianz for many years.

Bruce holds a Master’s in Business Leadership and an Honours Degree in Economics. Bruce has worked and lived in Asia since 2000.

Yezdi is responsible for the development of investment strategies, as well as optimizing the investment performance of Generali’s Asian insurance operations. Prior to joining Generali, he was with Allianz Global Investors, Prudential Property Investment Management and JPMorgan Chase.

Yezdi holds a Bachelor’s degree in Commerce and LL.B. from the University of Mumbai.

With over 20 years’ experience in the insurance, service and legal industries, Jan has wide experience in negotiating, structuring and drafting relevant agreements, providing business oriented advice and managing teams in both developed and emerging markets.

Before joining the team in Asia, Jan spent 5 years with Europ Assistance (part of Generali Group) as Group General Counsel & Head of Compliance, based in Paris; where he led a team of over 30 lawyers and compliance officers worldwide.

Jan also held senior management roles at Foncière des Régions - a listed real estate investment group in France - and Ipsos, a listed international market research group. Before that, he was with Ashurst and Van Bael & Bellis law firms in Paris and Brussels respectively.

Neil Gardner is responsible for Marketing, Branding and Communications, Digital and Analytics, and integrating Operations as part of the overall customer experience.

Neil has over 25 years of extensive experience in the Banking and Insurance industries especially in customer centric roles, having worked with GE Money, Citibank and AIG in Asia. His career has a focus on a broad range of Marketing and Customer insights roles with significant experience in Direct Marketing.

Neil started his career in the UK in the retail and finance industry; and holds a Mathematics and Computer Science degree from De Montfort University in the UK.

She draws from a corporate experience of over 25 years spanning Corporate Finance and Human Resources in India and the Asia Pacific region across global organisations like Telstra, HSBC, ABN Amro and the Royal Bank of Scotland. Prior to a career in HR, Gurpreet has over 14 years of experience in Corporate Finance in GE Capital, Lazard and ANZ. Due to her background in Finance, she has a strong commercial focus and an unique ability to navigate and translate HR policies to support business priorities. Based in Hong Kong and having worked in regional and global roles for the past 11 years, she is extremely comfortable working in a matrixed, multicultural environments.

Gavin has been Chief Actuary at Generali China Life (GCL) since the company began in 2001. Gavin was heavily involved in the set up and development of GCL which has now grown to be one of the top joint ventures in China both in terms of premium and profitability. He was also responsible for various areas in GCL including actuarial, risk management, distribution, product, strategy and planning. A fellow of the Society of Actuaries, Gavin has extensive experience in the insurance industry, having worked for companies such as Manulife, Hong Leong Assurance (Malaysia) and Insurance Corporation of Singapore.

Axel Roesner is responsible for strategy execution, profitable growth and development of the corporate and commercial business across Asia. His team is serving corporate clients, and the ecosystem around them, helping their businesses succeed, and offering them a seamless experience through value-added services and industry expertise.

Axel has over twelve years of insurance industry experience in leading strategy execution, business development and operational excellence. In his previous role, Axel led Operations, IT and business transformation for the corporate and commercial segment across Asia.

Prior to joining Generali, Axel was with Zurich where he held various senior roles in Pricing & Analytics and Underwriting operations. Axel started his career in asset management. He holds an MBA in International Business from California School of International Management and is a certified Lean Black Belt.

As Regional Head of IT, Dipak Sahoo drives the implementation of IT strategies in Asia, identifying synergies between countries to improve customer experience effectiveness.

Dipak has over 20 years’ experience in the insurance sector. He spent most of his career with global insurance companies in senior leadership roles in the areas of technology, operations and transformation across APAC and Europe.

Prior to joining Generali, Dipak worked for Capgemini, a global consulting firm, where he played a significant role setting up their insurance practice across the APAC region. Dipak has also worked in technology leadership roles with global insurers like AXA and AIA in their country and regional operations.

Dipak started his career in India and over the last 10 years lived and worked in Hong Kong, Australia and Italy.

Umberto is responsible for addressing, coordinating and monitoring internal audit activities, as well as conducting business and IT audits on group companies and branches across Asia. Prior to joining Generali, Umberto worked for a major Italian commercial bank in different capacities in Australia, China, Hong Kong, Italy and UK.

As Regional Head of Health, Dr Hak Hong Soo is responsible for strengthening Generali’s Health business in the market and accelerating its leadership presence in Asia.

Prior to joining Generali, Dr. Soo was working with Munich Re in various senior management positions in Hong Kong, Taiwan and Singapore. Dr Hak Hong Soo also worked for direct insurance companies in Singapore and Indonesia, and held important actuarial roles including being the Chief Actuary of PT AJ Sequis Life in Indonesia.

With over 20 years’ experience in both life and health insurance and reinsurance, Dr Soo has a diverse regional exposure especially focusing on Greater China, Indonesia, Singapore and Malaysia markets. Dr. Soo studied at University of Nebraska-Lincoln, USA with a Ph.D. degree in Economics and Insurance, and he is an Associate Member of Society of Actuaries.

Jenni Sparks drives the regional finance and accounting operations as well as monitors the financial management of Generali’s businesses in Asia.

Jenni has over 30 years of international experience in insurance and financial services across Australia, Japan and Korea. Prior to joining Generali, she was CEO of Hartford Life Insurance KK. Between 2003 and 2011, she held various senior management positions within AIG, including Chief Financial Officer for AIG Edison Life in Japan and Regional Controller for AIG Life companies in Japan and Korea.

Jenni holds a Bachelor of Science with First Class Honours in Applied Mathematics from the University of Adelaide. She is also a Fellow of the Institute of Actuaries of Australia.

With over 30 years of experience, John has deep and practiced expertise in developing insurance business, executing acquisitions and forming partnerships. A seasoned executive, John has led a range of financial services businesses in Australia, Canada and Asia.